The accumulation of points from each tournament’s top 10 billfish teams will determine the Grand Champion boat, captain, and first mate for the Texas coast. While it is not required to participate in each of the three tournaments to be eligible for the Texas Triple Crown, there is an advantage in registering for all three, “As competitive as this is, fishing all three heightens the odds of becoming the Texas Gulf Coast champion,” states T.I.F.T. Executive Board member, Matt Klostermann.

The creation of the Texas Triple Crown Billfish Series is a collaboration ten years in the making. Klostermann credits Randy Bright, Chairman of the Lone Star Shootout - put on by the Houston Big Game Fishing Club - for sparking the idea; working with Captain John Cochran with Texas Legends Billfish Tournament; and, Daniel Bryant, T.I.F.T. Executive Board President in addition to Klostermann. The three participating tournaments all have their own unique and distinguished histories and traditions and provide for a powerful partnership to promote and grow the sport of competitive bill fishing in Texas.

Inspired by the East Gulf Coast Series, which includes Louisiana, Alabama, and Florida Gulf Coasts and ends in mid-July, the Texas Triple Crown provides more interest and incentive for billfish anglers to participate in the three Texas tournaments. The first tournament in the series begins after the East Gulf Coast Series ends. “We are already seeing interest in the Triple Crown Billfish Series. It fits what they [anglers] have been asking for,” says Bryant.

A perpetual trophy will be awarded to the Texas Grand Champion team immediately following the Texas Legends Tournament. World-renowned wildlife sculptor, Kent Ullberg, has crafted the Blue Marlin trophy. This remarkable trophy will travel to each tournament and be housed on a year-round display at the Fisherman’s Wharf in Port Aransas, Texas. 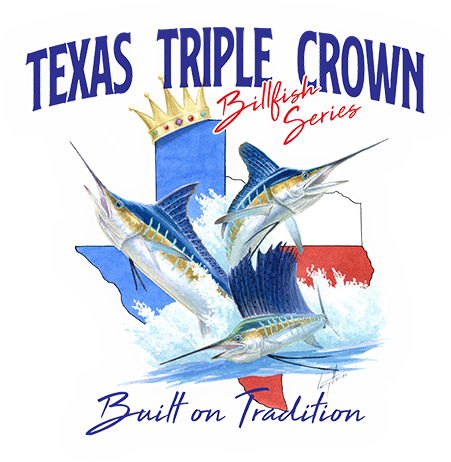